If you missed part one of this post, describing what my experiment was and why I did it check it out here. Tl;dr it: I noticed I had literally hundreds of accounts following and then unfollowing me quickly so I identified some red flags for accounts that do it and I decided to try it myself.

I was curious after 200+ accounts followed/unfollowed me, most following and unfollowing within 24 hours, does this shady practice actually get you lots of followers? Are people that dumb because I caught on pretty quickly..? So I gave it a try. I followed ten accounts a day for a week using specific criteria on ones that I thought would be most likely to follow back. As I stated in my last post, I have removed the name and username of the example accounts that follow/unfollow because it is not my intention to call anyone specific out.
Most of the people I talk with on instagram, my followers and those I consider friends, seem to agree that follow/unfollow is rude, shady, or downright evil! So why do so many accounts do it? Does it really get you tons of new followers?

I followed accounts on instagram to get more followers 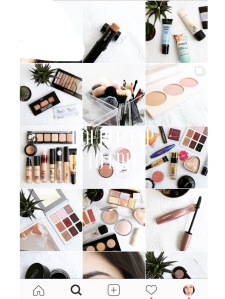 Unlike the follow/unfollow accounts I did not unfollow people immediately. However I wasn’t interested in all 70 of the accounts I followed so I will be unfollowing some of them. No disrespect to any of those accounts – not every account produces quality photos and as our feeds become clogged we do have to pick and choose who we want to see. I don’t follow accounts that only post giveaways for example, because I like to see photos of what people makeup are using and the looks they are creating with it! It’s also my personal preference but I’m not a fan of the super white, generic, lifestyle type accounts – they all look the same and it this point that look is pretty boring and overdone. I know you know the ones I mean! I like personality, not feeds where I can’t tell one photo from another user’s and where it looks like you’re just trying to appeal to the most number of people. No judgment that is just my preference, to me makeup = COLOR!
I am not unfollowing anyone who followed me back however! 🙂

Here is the result of my follow/unfollow experiment.
I followed 70 accounts and 15 followed back. That is a lot of work for not much payoff! I think it could be that people don’t automatically follow back anymore because we are so used to people unfollowing and following just to get the follow. It’s possible some people looked at my feed and weren’t interested and decided not to follow back. Probably some don’t use instagram daily. Overall the time it took to follow and unfollow didn’t seem worth it to me, of course I made an effort to see who had actually followed back and didn’t unfollow them – it is probably quicker for people that don’t care about following anyone and just batch follow and unfollow. That to me still just feels shady and douchey, even with a low payoff I guess it would work to get followers if you are doing it with hundreds of accounts but I can’t see doing that myself.
Unfortunately the best way to get followers is a slow way – to create great content and to slowly build a REAL base of engaged followers over time. I will be sharing the results of my giveaway experiment in the future so stay tuned for those stats!